“Tragedy is an imitation of an action that is admirable, complete
and possesses magnitude; in language made pleasurable, each of its species separated in different parts; performed by actors, not through narration; effecting through pity and fear the purification of such emotions.”  (p. 10)

REVERSAL (p. 18) - Reversal: (pg.18) a reversal is a change to the opposite in the actions being performed, in accordance with probability and necessity. For example, in Oedipus someone came to give Oedipus good news and free him from his fear with regard to his mother, but by disclosing Oedipus’ identity he brought about the opposite result; and in Lynceus, Lynceus himself was being led off to be killed, with Darius following to kill him, but it came about as a consequence of preceding events that the latter was killed and Lynceus was saved. Reversal is usually associated with recognition.

RECOGNITION (p. 18-19) -  Recognition: (pg. 18&19) a change from ignorance to knowledge, disclosing either a close relationship or enmity, on the part of the people marked out for good or bad fortune. Recognition is best when it occurs simultaneously with a reversal, like the one in Oedipus. There was of kinds of recognition: it can come about in a manner with respect to inanimate objects, and it is also possible to recognize whether someone has or has not performed some action. For recognition and reversal to occur simultaneously, it should involve either pity or fear. Since a form of recognition is a recognition of some person or persons, some involve the recognition of one person only on the part of the other, when it is clear who the other is; but there must be recognition of both sides.

DICTION (p. 13) - Diction is more-or-less the spoken word between two characters. Aristotle classifies it as the fourth most important part of tragedy. He describes it simply as “verbal expression”

REASONING (p. 12) - Reasoning, like Diction, is intrinsic in its meaning. Aristotle describes it as “…the ability to say what is implicit in a situation and appropriate to it… [Reasoning is] the means by which people argue that something is or is not the case…” (p.13). He calls it the third most important part of tragedy.

LYRIC POETRY (p. 4; 10-11) - Aristotle says this term is self-evident in its meaning, and does not say much else about it. It is (along with Diction) the medium by which actors perform imitation, known as mimises. (p. 10). Different types of lyric poetry include sonnets, dramatic monologues, and elegies. Famous composers of lyric poetry include Sophocles, Shakespeare, Edgar Allen Poe, and Emily Dickinson.
COMPLETENESS (p. 13) - The possession of a beginning, middle, and ending. A tragedy must be complete in its introduction, middle plot, and conclusion of the story.

MAGNITUDE (p. 14) - All tragedies must possess a dilemma of high degree and depth, which ultimately leads to even greater consequences.

UNITY (p. 15) - The circulation of actions in a tragedy that lead to one main issue, purpose, or theme. All factors of a tragedy must work towards one centralized function and tie together.

UNIVERSALITY (p. 16-17) - a person of a certain type will on occasion speak or act, according to the law of probability or necessity; and it is this universality at which poetry aims in the names she attaches to the person- ages.”


ASTONISHMENT (p. 17) - Astonishment refers to the play’s ability to inspire 'fear and pity.' Both fear and pity are evoked from an audience when the events come by surprise,

PURIFICATION / KATHARSIS (p. 10) - A Tragedy first evokes the emotions of pity and fear, then purifies or purges them. Whether Aristotle means to say that this purification takes place only within the action of the play, or whether he thinks that the audience also undergoes a cathartic experience, is controversial. 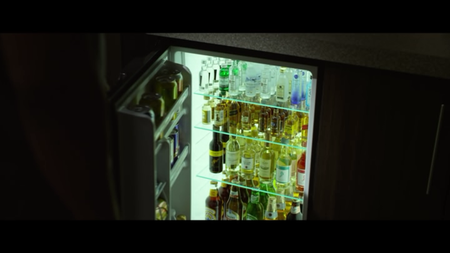 Hollywood screenplays tend to follow the basic guidelines laid out by Aristotle.  Flight is an excellent example of how Aristotle's theories continue to influence the storytelling in mainstream Hollywood films.
The hero of Flight, Whip Whitaker, shares much in common with Oedipus.  He enjoys a position of great respect and leadership (he is a pilot), and like Oedipus he is both charismatic, arrogant, risk-taking, and flawed.  He is an alcoholic whose "miracle-on-the-hudson"-style landing was accomplished when he was drunk.  Like a Sophoclean character, his flaws and his strengths are closely tied together. 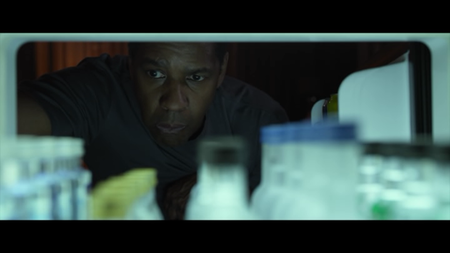 In this scene we see Whip Whitaker at an important crossroads of his destiny.  It is the night before the NTSB hearings for the flight he heroically/drunkenly saved.  It is of the utmost importance that he stay sober.  The door of the hotel room beside his own has been left open (accidentally?), leaving a fridge full of alcohol available to him.  This he discovers after a long night of sobriety in his alcohol-free room.
The neighboring hotel room functions as a kind of existential crisis zone: he stands at the window watching a plane moving upward across the sky (his higher calling), but he is distracted by the hum of the fridge, calling him toward his addiction.  He opens the fridge and stares at the alcohol within. 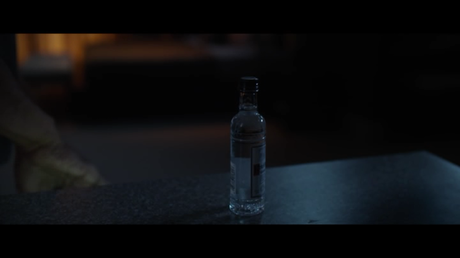 He opens a bottle, smells it, and then closes it again.  He places it on top of the fridge (it's significant that he doesn't put it away in the fridge entirely). Now he walks away.  You can see him leave the frame of the shot, a cue that (seemingly) he has resisted temptation and is safe.  He will make it back to his hotel room and get a good night's sleep before his hearing. 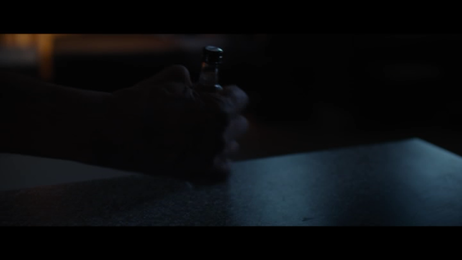 But...just when we think he has safely averted temptation, we see his hand come out of nowhere.  With a melodramatic, law-and-order-like soundtrack, his hand dramatically swipes the bottle away, the cue for his all-night bender to begin.

This is REVERSAL.  Suddenly, the plot is going in the opposite direction.
It is now clear that Whip Whittaker won't get to his hearing sober.  The conditions are set for his career to be ruined-- and eventually, through the redemption that suffering and coming clean provides-- to lead the audience to katharsis.  At the hearing, Whip Whittaker decides, much like Oedipus, that he has reached his "lifelong threshold for lies" and will bear any consequences that telling the truth requires.  The film ends with Whip Whitaker telling the story of his redemption through suffering in prison.
Case Study: Recognition in The Place Beyond the Pines (2013)

Luke and Romina's brief romance leads to her pregnancy and the birth of Jason.  Luke and Romina seem to love each other, but their timing is off and the love is a melancholic, star-crossed one.  By the time Luke learns about his son, Romina is already with the man who will become her husband and Jason's step-father.  In an effort to support Jason, Luke embarks on a life of crime that leads to his death at the hands of a police officer (Avery Cross).  This star-crossed family has only one moment of fleeting togetherness.  It happens one day when Luke persuades Romina to let her feed his son ice cream for the first time.  Romina is crying over the bittersweetness of the moment, which is recorded in a photograph taken by a passer-by.  "Should I take it while she's crying?" the photographer asks, in response to which Luke covers her eyes.  Luke has this photograph in his wallet at the time of his death. 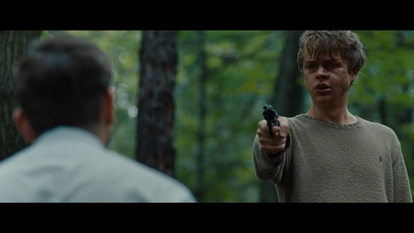 Avery Cross, the police officer who kills Luke during his attempt at a getaway, takes the photo from Luke's wallet and carries it with him.  Fifteen years later, a teenage Jason takes Avery hostage and takes him out to the woods to avenge his father's death.  Avery breaks down in tears and says "I'm sorry, Jason." 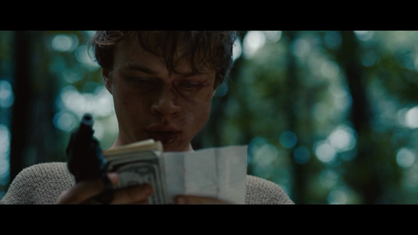 Jason takes his wallet but decides not to kill him.  He runs away through the forest and opens Avery's wallet. There he finds the photograph, which serves as the token that provides him with the Recognition that Avery is truly remorseful.

Remember that Aristotle did not think very highly of the use of Tokens such as photos, necklaces, or birthmarks for Recognition.  He thought that they were shortcuts and slightly gimmicky/contrived compared to Recognitions that arose naturally out of situations. 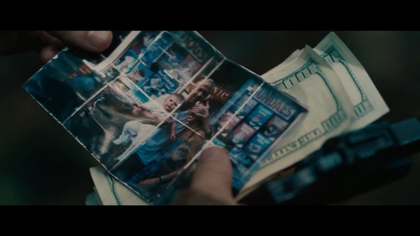 In this case, you can see the film-makers trying to make the Recognition-by-Token less cheesy by deferring Jason's finding of the photo until after Avery apologizes, so that it merely confirms the Recognition that Avery is remorseful, but doesn't bring it about.

The recognition would have been more classically tragic if Jason had found the                    photograph confirming Avery's remorse only after having killed him (like Creon's               recognitions in Antigone after Haemon, Eurydice, and Antigone are already dead).
But Jason opts for the higher road: he does not kill his father's killer, and manages to come to the point of recognition that brings him in tune with his true parentage and identity without having to kill anyone. 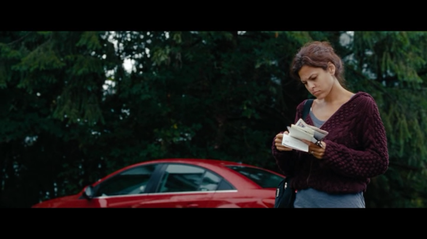 The photograph is used again, for a second Recognition scene.  Jason sends it to his mother Romina.  Here, it is used to facilitate her Recognition that Jason has gotten to the root of his father's story.  It is also used to communicate to his mother an emotional recognition that he hopes she might recognize too, despite the sad ending of her relationship with Luke: that once upon a time, for a brief moment, these three were a family.   Romina, whose eyes were closed in the photograph (perhaps because she couldn't recognize Luke as a husband), now faces her past with her eyes open.