Moraga frames her adaptation by:

1. Describing the inspiration she finds in Mexican history and culture.

"Heart of the Earth and The Hungry Woman came to me as organic outgrowths of my own journeying as a xicanadyke and a writer in the early 80s.  Rather belatedly in Movimiento terms, I first went south, as other Chicanos had before me, in search of my “raíces” and a cultural connection with a contemporary México.  What I encountered instead was the daily, and often painful, reminder of my own outsiderhood as a U.S.-born Mexican of mixed parentage.  But the templos of México—Monte Albán, Palenque, Tulum, Teotihuacán—told me something different.  As I ascended those temple steps, I unwittingly descended into the visceral experience of a collective racial memory that everything about my personal biography had rejected, but one that my writer’s soul irrefutably embraced.

…Who are my gods?  Who are my people?  The response is the same for both questions, I discovered, when I discovered the mutilated women of our indigenous american history of story: La Llorona, Coyolxauhqui, Coatlicue.  I worship them in my attempt to portray them in all their locura, because I admire the living expression of their hungers" ("Hungry for God," ix-x).

2. Acknowledging the debt she feels to women artists

Where can I go?  Is it possible to imagine a world,
a time, where i would have a place?
There's no one I could ask.  That's the answer.
Christa Wolf, Medea: A Modern Retelling

3. Describing the Development History of the play (its writing, workshopping, and production in California regional theaters)

The Hungry Woman was originally commissioned by Berkeley Repertory Theater, where it received a staged               reading on April 10,1995, directed by Tony Kelly.

She describes her project as one that looks backward in order to look forward  It is also one that combines Greek and Aztec mythology, a process Linda Hutcheon (in A Theory of Adaptation) calls indigenization.  This describes the way in which Greek stories are brought into new cultural contexts, where they are transformed and challenged.

"This preoccupation with the past as a foretelling of our future may be the reason why I have lately begun to write stories placed in an imagined future…" (ix).

"The time: The early part of the second decade of the twenty-first century.  A future I imagine based on a history at the turn of the century that never happened" (6). 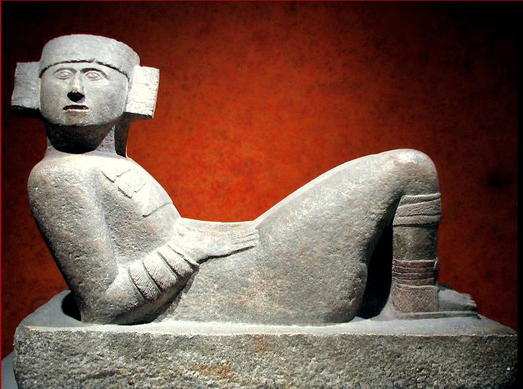 A Chac-mool is a kind of sculpture (pre-Columbian Mesoamerican). It takes the form of a figure leaning back with its head facing forward and a bowl on its stomach. The bowl held sacrificial offerings, such as tamales, tortillas, tobacco, and incense.
Key Terms:

Coatlicue: The Aztec goddess of Creation and Destruction

"When I finally lifted the lid to my lesbianism, a profound connection with my mother reawakened in me. It wasn't until I acknowledged and confronted my own lesbianism in the flesh, that my heartfelt identification with and empathy for my mother's oppression--due to being poor, uneducated, and Chicana--was realized."  --Cherrie Moraga (1952-present)
Powered by