"You might call [burlesque] rubbish, buffoonery, vulgarity, anything you liked, but your temperament must have been abnormally phlegmatic if you could resist the influence of that riotous mirth and not be carried away by it."

The film features the British comic actor Steve Coogan as high school drama teacher Dana Marschz, alongside an American cast that includes Elisabeth Shue, Catherine Keener and Amy Poehler as well as some young actors like Joseph Julian Soria (as Octavio/"Heywood"/Hamlet), Phoebe Stroll (as Epiphany/Ophelia), Skyler Astin (as Rand/Laertes), Melonie Diaz  (as Ivonne/Gertrude), and Natalie Amenula (as Yolanda, the object of much head trauma in the film's recurring visual gag).

The film tells the story of Dana Marschz's failing marriage alongside his quest to stage a sequel to Shakespeare's Hamlet that will save drama in his school district, where drama courses are about to be cut as a cost-saving measure (as part of a general demolition of Arts Education).   The film includes send-ups of many stereotypical figures from Hollywood film and from culture at large: the inspirational teacher, the gay drama student in a small, conservative town, the privileged suburban white teenage girl, the disaffected "urban youth" (a "Mexican boy who lives by his wits" who turns out to be a student with early acceptance to Brown), the ball-busting blonde female lawyer, the philistine school principal, the fading Hollywood actress, and more.

Like John Madden's film Shakespeare in Love (1998), which was written by Tom Stoppard, Hamlet 2 is an affectionate tribute to Shakespeare, and also a loving tribute to the power of theater, the communities it can create, and the cathartic experiences it can provide.  But unlike Shakespeare in Love, with its genteel tone and its setting in a lush, fairytale version of Elizabeth England, Hamlet 2 is full of profanity and vulgar humor on unmentionable subjects and it takes place in Tuscon, Arizona, a town that seems to represent an American experience as distant as possible from the supposed "natural habitat" of Shakespeare.  In addition to being a burlesque of Hamlet, the film also spoofs other genres, including the "inspirational teacher" movie (Dangerous Minds, Mr. Holland's Opus, Dead Poets' Society) and the "Hey, let's put on a show!" backstage musical, which enjoyed its heyday in the 1930s (in movies like Girl Crazy starring Mickey Rooney and Judy Garland) and is enjoying a contemporary renaissance in works like Glee and High School Musical.  In the "play within a play" structure and the use of choral/musical elements, we see the lingering influence of both Greek and Shakespearean dramatic form.  There are also many theatrical in-jokes and references, including:

There are also elements of the plot that follow the plot of Hamlet, including a usurper in the home (the boarder Gary) and a Gertrude-like treacherous wife, as well as a main character who is haunted by the legacy of his father.

The Arizona setting makes this film a companion piece to Cherrie Moraga's The Hungry Woman: A Mexican Medea, which similarly uses Arizona as a shorthand for "American cultural wasteland" (in ways that I'm sure people from Arizona would not be very happy about).

We watched Hamlet 2 to conclude our course as a way of thinking about the relationship between tragedy and comedy.  Hamlet 2 is an example of a particular kind of comedy: burlesque.  As I mentioned in class, this is not the kind of "burlesque" we usually associate with the term (ie. striptease).  That kind of burlesque, which is "American burlesque," has historical connections to the kind we're talking about here, but is not quite the same thing.  By "burlesque" in this context we mean the send-up of a classical text in a comic style.

The Oxford English Dictionary definition of Burlesque reads, in part, as follows:


That species of literary composition, or of dramatic representation, which aims at exciting laughter by
caricature of the manner or spirit of serious works, or by ludicrous treatment of their subjects; a literary or
dramatic work of this kind.

Grotesque imitation of what is, or is intended to be, dignified or pathetic, in action, speech, or manner; concr.          an action or performance which casts ridicule on that which it imitates, or is itself ridiculous as an
unsuccessful attempt at serious impressiveness; a mockery.

In class, we discussed two kinds of burlesque.

1. High Burlesque: when a literary, elevated manner is a applied to a low subject.  Example: Jersey Shore Gone Wilde (see link below, and please note that there are actually five of these on youtube for your viewing pleasure-- I have only provided the link to the first one).

2. Low Burlesque: when an irreverent, mocking, "low" manner is applied to a high subject.  Example: Hamlet 2.

Sometimes the word "Travesty" is used interchangeably with the word "burlesque."  As you can see, the Oxford English Dictionary defines one word in terms of the other:

SOME CRITICAL BACKGROUND ON BURLESQUE 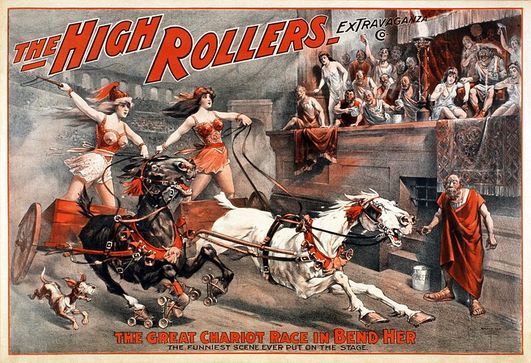 Poster for an American burlesque of "Ben Hur," 1900.
This tradition of burlesquing classical plays and works was very popular in 19th century Britain and (to a slightly lesser extent) America, when you could go and see whole evenings of entertainment designed as spoofs of classical stories like those found in Greek mythology and Shakespeare.

Here is an excerpt from a chapter called "The Ideology of Classical Burlesque," which is found in Fiona Hall and Edith Macintosh's book Greek Tragedy and the British Theatre, 1660-1914 (Oxford University Press, 2005).

The founding father of the genre, James Robinson Planché, saw ‘burlesque’ as the systematic comic rewriting of a particular piece work     of literature, to be distinguished from the ‘extravaganza,’ which was a theatrical spectacular only based on a familiar story.   But in             practice the boundaries are impossible to maintain: self-styled extravaganzas included extended parodies of familiar texts, while                 self-styled burlesques, which often contained lavish spectacle, could depart considerably from their textual archetype.  By 1870 a                 comic theorist remarked that nobody—managers, authors, actors, or an audience—could define burlesque, much less describe it: if             pressed, they would say it used “low dresses” (ie. lower-class clothing), and was “a thing made up of dancing and jokes and an old                 story” (355).

…dozens of burlesques on classical themes were performed on the London stage.  They drew on ancient sources—especially epic and     tragedy—which would have been encountered by the authors at school or university (358).

The Odyssey was a staple of the genre, and the Iliad was the source of Brough’s The Siege of Troy, whose huge cast of Greeks, Trojans,     and Immortals was supplemented by ‘Camp Followers, Policemen, Thieves, Philosophers, and Poets” (358).

Frank Talfourd’s popular Electra in a New Electric Light.  This was one of the Easter entertainments offered to London theatre-goers in     1859 (360).

Song was central to burlesque, which drew not only on favourite tunes from familiar operas, but also on the vast repertoire of ballads,     nursery rhymes, and formulaic genres of popular song in the English language (366).

Physical routines borrowed from the circus and sporting competitions were also regularly featured.  In Lemon’s Medea Jason has a         boxing match with Orpheus, and is also a skilled acrobat and knife-swallower (371).

The subversiveness of the genre, however, was expressed more by its tone and stance than by its explicit content.  To burlesque any         'classic’ text is of course slightly subversive.  But to travesty the very content of the education which divided the classes and fostered the     elite, in front of a distinctively cross-class audience, was a complex procedure of some ideological complexity.  The insouciant attitude     of the generation of burlesque writers in the 1850s and 1860s is clear from their subtitles, which self-consciously indicate disrespect         for their sources: Talfourd’s Alcestis; the Original Strong-Minded Woman: a Classical Burlesque in One Act (1850) was brazenly                 subtitled a most Shameless misinterpretation of the Greek drama of Euripides.  Classical burlesque is thus related to the serious             critiques of classical education which serious-minded intellectuals were publishing at the time, and to the humorous accounts to be         found in the works of the comic prose writers [like Charles Dickens] (375-6).

…this form of entertainment…soon developed pornographic associations.  From the 1840s onwards well-formed female models in         skin-tight “fleshings” could be seen in the popular poses plastiques, in which they imitated naked classical sculptures for the                     delectation of audiences…(390).

[The mid-Victorian classical burlesque was] ideologically complex,…rich….dazzlingly cheeky, and surprisingly erudite.  For this important genre of popular theatre transcended narrow class interests, repudiated classical education and yet at the same time appropriated the most pleasurable parts of its contents for ordinary people (390).

The leading scholar of Victorian burlesques of Shakespeare is Richard W. Schoch, whose book Not Shakespeare: Bardolatry and Burlesque in the Nineteenth Century (Cambridge University Press, 2005), is a brilliant guide to the subject.  It is available in Walsh library (call number PR2880.A1 S32 2002).  It includes information on nineteenth-century burlesques of Hamlet including one called "Hamlet: The Ravin' Prince of Denmark!!" (1866).

If you are interested in reading more about Burlesque, I have included three interesting critical articles as starting places below.  Schoch considers the Victorian burlesque of Shakespeare a complex kind of performance.  Here are some of his reflections on the genre.  He is talking about the Victorian stage predecessors of the 2008 film Hamlet 2, but we can still use his ideas to test out what might be happening in Hamlet 2.

The burlesque thus repudiates the stature of the ostensibly legitimate production which it parodies even as it revalorizes Shakespeare’s     canonical authority—that is, it enables the playwright and his tragic heroes to be “great in travestie.”  In doing so, the burlesque                 empowers itself to define and to enforce standards of Shakespearean correctness.  We can glimpse, in such a disciplinary regime, the     underlying sobriety of the burlesque which leaves its audience in a state of interpretive perplexity. …the Burlesque actively intervenes     to protect Shakespeare from his real detractors (burlesque playwrights being falsely perceived as detractors).  (978)

Not held hostage to any historical moment, and least of all to its own, the burlesque descended to the level of contemporary                     mise-en-scene only to rescue the playwright from just those topical “peculiarities.”   Behind the undeniably pronounced localism of         nineteenth-century Shakespeare travesties, behind the bracing freshness of their slang and up-to-the-minute puns, there also lurked         an equally pronounced universalism which secured the travesty’s contorted authority and perverse canonicity—reminding us just how     obligingly the Victorians had acceded to Thomas Duffet’s prescient injunction of 1673: “to get good Plays, be kind to bad Travesty.”

A FINAL NOTE: If you haven't watched it yet, please be sure to take a look at the two-minute musical burlesque of Richard III at the bottom of the "Mock Hamlet Exam" page of this website.  "Can you imagine it, I'm the last Plantagenet?" surely takes the prize for Best Rhyme. 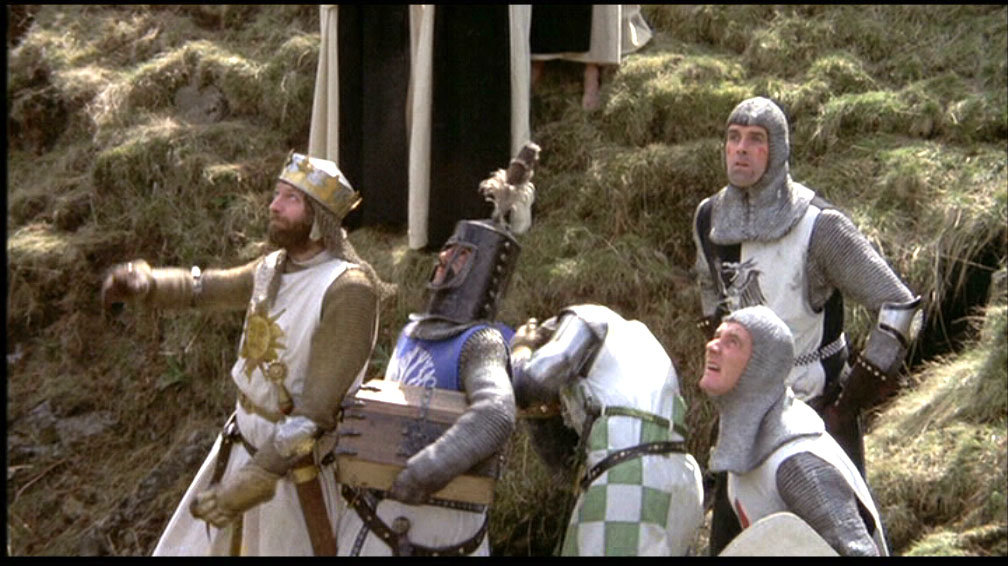 Monty Python and the Holy Grail (1975), a burlesque of the legend of King Arthur.
Powered by