The following is drawn from Chapter 2: “Descanting on Deformity: Richard III and the Shape of History.”

I would like to arrive, in this chapter, at a consideration of the way in which “time’s deformed hand” writes, and thus defaces, history.  The concept of “defeature” is a useful place to start from, since the visible marks of political defeat are often written, or characterized, in what one age will call history-writing and another, propaganda.  My subject, the “defeatured” player in this exemplum, will be Richard III, an especially interesting case not only because of the fascination that history has exercised both on admirers and detractors, but also because, like Oxford and Bacon in the Shakespeare authorship controversy, Richard III has been the occasion for more amateur detective work, and for the foundation of both English and American societies to clear his name.  The Richard III Society, also known as the Fellowship of the White Boar, was founded in England in 1924; the Friends of Richard III Incorporated, the Society’s American counterpart, included among its founding members the actresses Helen Hayes and Tallulah Bankhead (29).

The most recent full-length study of Richard, by Charles Ross, while in most ways an apparently extremely careful and balanced account, shows the usual pique at this “amateur” espousal of Richard’s cause, which has led in turn to the unwelcome development of amateurs writing history…. Ross cites Josephine Tey, Rosemary Hawley Jarman, and “a number of others, nearly all women writers, for whom the rehabilitation of the reputation of a long-dead king holds a strange and unexplained fascination.  By implication these women are following the self-deluded path of Lady Anne, whose “strange and unexplained” capitulation to Richard’s suit in Shakespeare’s play demonstrates female folly and a slightly sentimental belief that a bad man can be reformed or redeemed by the love of a good woman (29-30).

Here is the BBC documentary Richard III: The King in the Car Park, which details the discovery of Richard III's remains in Leicester:

Skeleton of Richard III unearthed in 2013.
The film Richard III: The King in the Car Park raises questions about the nature and extent of the historical Richard's disability.

Here is what Richard says about himself in the play:

But I, that am not shaped for sportive tricks,
Nor made to court an amorous looking glass;
I, that am rudely stamped and want love's majesty
To strut before a wanton ambling nymph;
I, that am curtailed of this fair proportion,
Cheated of feature by dissembling nature,
Deformed, unfinished, sent before my time
Into this breathing world scarce half made up,
And that so lamely and unfashionable
That dogs bark at me as I halt by them--
Why, I, in this weak piping time of peace,
Have no delight to pass away the time,
Unless to see my shadow in the sun
And descant on mine own deformity. (I.i.13-27) 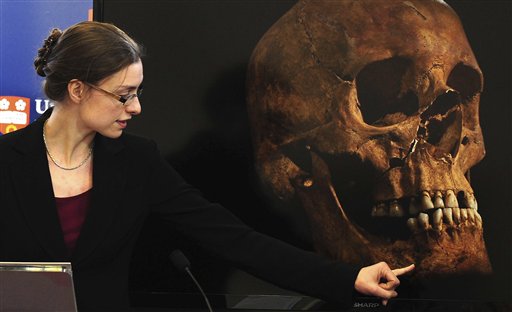 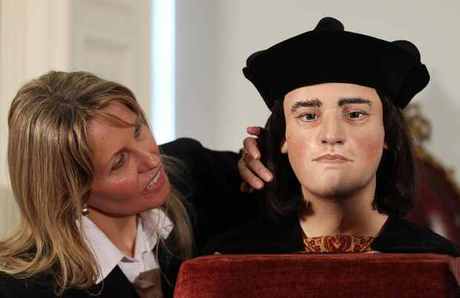 Philippa Langley, who initiated the search for Richard's tomb, is a RICARDIAN.
A Ricardian is someone whose goal is to clear the reputation of the historical Richard III, and someone who believes that Shakespeare unfairly maligned him in the play that bears his name.

Here is a statement of belief from Robert Hardy, the Honorary Patron of one of the societies set up to defend Richard.

"I am a Ricardian, if that means that I wholly reject Tudor propaganda against him, and firmly believe he was true to his motto "Loyaulte me Lie", and that he, apart from being a first rate fighting man, shouldered all the responsibilities that fell on him both as Gloucester, and as King. His death was a tragedy, a sacrifice to end the civil wars."
Powered by